THE STARS OF THE SHOW 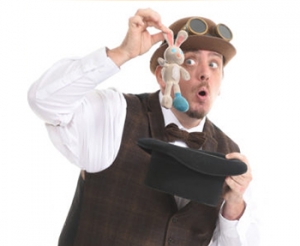 Matthew Wright: puppeteer, comedian, proprietor, magician extraordinaire! A devoted student of prestidigitation and the illusions they entail, Mr. Wright is a practiced and experienced practitioner of his craft. He studied Theater Practice at the Central School of Speech and Drama, a school that has produced such luminaries as Sir Lawrence Olivier and Dame Judy Dench. Following that, he also obtained a BA in special effects, where he specifically learned how to design and craft exciting and never-before-seen magic tricks; these efforts have won him several awards, including 2009′s The International Champion of Close-up magic and 2008′s magic Circle’s Close-up Magician of the Year, and he’s ready to bring these skills and unique tricks for your viewing pleasure.

If you are reading this then you have quite possibly already seen Matthew perform and know what a unique and rare talent he is but if you have happened to stumble upon this site just looking to hire a magician then it seems luck is on your side! Matthew is one of the most celebrated magicians not only in the UK but all across Europe. He has won more awards than his friends can bear to listen to him list and his crazy comedy character has resulted in people describing him as “an autistic Doctor Who”, although Simon Cowell was possibly more accurate when he said, “Matthew, your magic is amazing but you are rude, arrogant and obnoxious.” Charming. 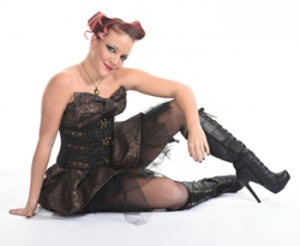 Alarna has been performing in the theatre from a very young age. As a child she performed as a backing singer for Abba Gold, in professional pantomimes, and many theatre musicals. She went on to get a BA honours degree in Performing Arts, specialising in theatre and radio acting, Shakespeare and singing. Since then her career has taken off as an international singer. She began singing the bars and clubs in England, then spent two years performing in Spain wowing the crowds with her unique vocals before moving to Malta with Matthew to open up The Chamber of secrets. As well as performing in the show she became a well known in demand cabaret and tribute artist on the island.

Since selling the show in Malta to expand elsewhere she has spent another 4 years performing her successful tributes to Adele, Lady Gaga, Cheryl Cole and Pink in Salou and Benidorm. She spent the winter months starring in professional touring pantomimes and in Andorra as a magician’s assistant. She has recently been spotted and asked to perform at festivals in Britain so who knows where her career will take her next. She has always wanted to be on the stage, as this is where she feels most confident, but would also really like to try her hand at some TV. Her ultimate dream would be to go to Hollywood and star in a film. She says ‘I can’t think of any other job I would do. Performing is my life. I love it’. 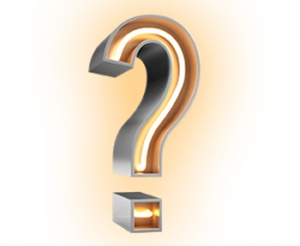 With experts of all types of entertainment visiting the Chamber of Secrets each month you’ll be treated to some of Europe’s top talent, providing guest spots in the show!